May be i'm just too sensitive...

Bites Tale : I'm feeling weak... but my friends said i should be ok since i can still work and type... i hope so too... but deep down inside.. i'm worried... i feel tired and dizzy easily.. i can even sleep when i'm having lunch outside.

May be i'm just being stupid / sensitive / anxious...

But i really feel sick nowadays...

I've fever and cold at the same time.

I've cough that don't seems to be recovering...

And the dizziness is still there...

Sigh... Is it the after effect from the boat accident?? Cos i feel like i easily get sick nowadays... i became so vulnerable to everything... the sun, the rain and the air con etc etc etc... Am i'm dying??

I really hope i can be healthy again... no more medicines, syrup and antibiotics...

I need energy to work!

I can only say the world is spinning around me...

Hope to get well soon... really got alot of work to finish...

Bites Tale : At last, i made a decision.

Not only did i made a decision, i acted on it...

i.e. No Action Talk Only

So, what are you waiting for? Go do what you wanted to!

It just get on my nerves so much that whenever i look at my own reflection from the mirror/window/glass door even when i'm out shopping .... i just wanna puke! (That's what i told the hairdresser! *evil grin)

I just want some changes! But the hair dresser i went to didn't wanna cut my hair too short... i think he scared that i might regret; or simply.... he just wanna hide my "round" face... so he gave me a shoulder length hair cut with lots of layers... but it's just not short enough to me...

Some friends told me that i'll look even more like a meatball if i cut it shorter... some until today still not getting used seeing me in short hair..But hor, i think.... the hair makes me look like a "pan gong mah" (* read in hakka) instead! :P

Hahahaha.... anyway, at least i no longer feel like i'm going to puke.

May be i'll just go for another hair cut just before the Chinese New Year to make it shorter....

Bites Tale : Although this is my 2nd visit to the Bee Farm.. i forgot we shouldn't have stand too close to the "box"... so when the bees start flying, we get "hit" on really hard by some of them... luckily none of us get stung...

We left Kota Belud at 10.50am and reached Kampung Gombizau at around 12.11pm after a short coffee break at a nearby bus stop in front of a school. 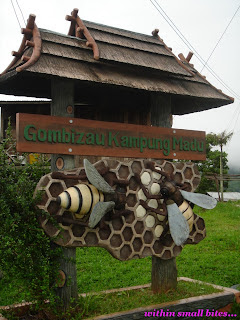 I remembered the 1st time when i visited the Bee Farm in 2005, we need to walk up to the "hill" where they put the bees into little square boxes made of wood scattered around the hill.. But, since it was raining and in order not to let the tourists get themselves wet and step on slippery ground, they have moved one of the bee box to a sheltered area nearby to demonstrate how the honey is collected. 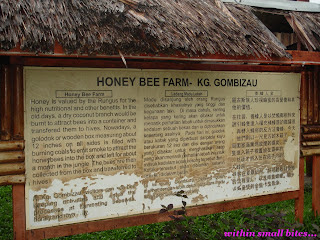 We were greeted by a young man at the ticket counter (RM 3 per person) and were brought to the "demonstration hall". Prior to that, he stuffed some burning leaves into a container and it then produces some smoke that he claimed it will make the bees feel dizzy so that they won't be able to sting. 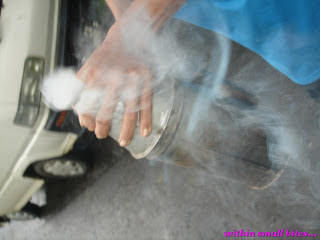 He warned us not to make any big movements or better still don't make any movement at all , then he pointed the smoke to the box without wasting any time, next, we see lots of bees flying to all directions from the box. Some hit on our body and it feels painful, some were buzzing around our ears and some were flying just in front of our nose... 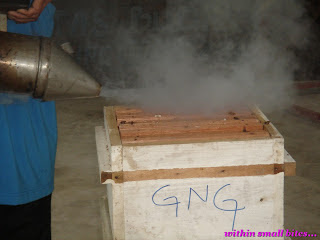 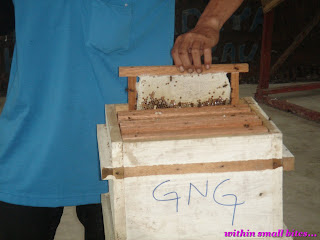 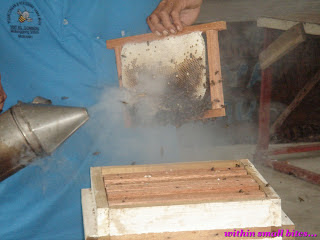 But, the smoke was not heavy enough to make all the bees leave the honey comb when he took out the honey comb... so he added more smoke to smoke the bees out... From what we could see, this honey comb was a rather "young" one.. normally we could see different shade of "holes" i.e. honey.. the older honey is darker in colour. 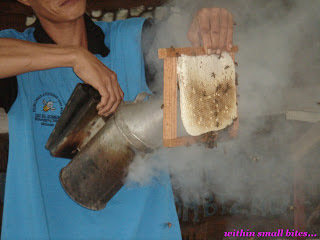 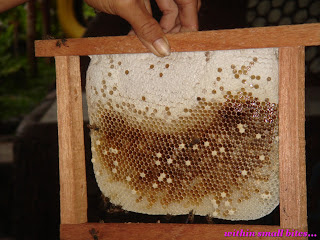 Then, a women (carrying a girl) helped to cut the honey and we got our chance to try on fresh honey out of the comb.. i asked the young man whether we could eat the white colour thingy... he said we need to spit that out.. we just need to taste how sweet the honey is. 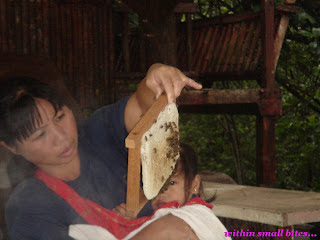 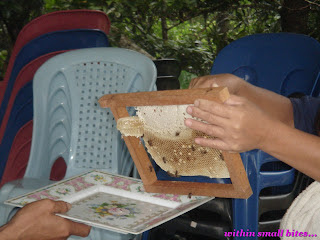 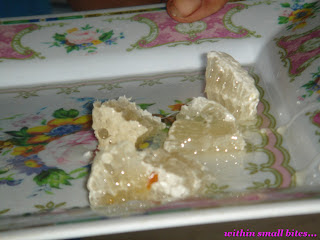 Before we leave, our guide bought a bottle of honey to bring with us for our remaining journey. 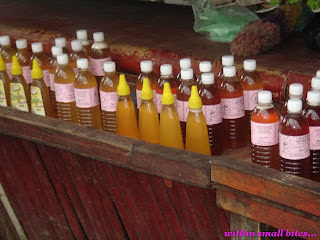 He said that some of us might get sick and honey could be the remedy to "revitalise" us and makes us feel better.. to which he was right! 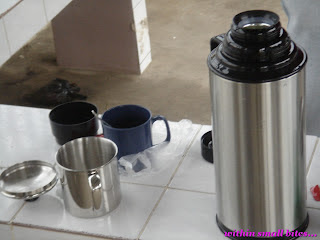 Pic : Having occassional stops for "recharge" like this makes us awake!

Bites Tale : As we were leaving the tamu, someone snapped a picture of us... it was him, he was there to give me a surprise.. but we couldn't stay long... so it was like less than a minute for us to say goodbye before i hopped on to the car again...

I know i have been neglecting my blog. Didn't do it intentionally, am busy with work for the past few days. I'll start blogging about the December trip from now on.. i think i'll be using about 8 - 10 entries on the whole trip, hope i won't bored you.

We meet up with the 2 guides and the driver at 8am on 9th December 2007 and "officially" started our whole driving trip across some of the tourist spots in Sabah.

Our 1st stop was the "Tamu" i.e. open market at Kota Belud. According to our guide, the word "Tamu" actually means "meeting place". During history time, due to the lack of transport facilities and in order for the different tribes / natives to be able to buy and sell or to barter trade necessities such as farm products, hardwares and food, they decided to "gather" at a specific venue on a specific day of the week. This activity is still a practice for the local natives and the Sunday "Tamu" at Kota Belud is among the most famous one in Sabah. 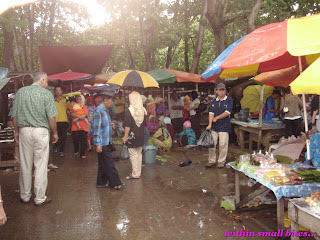 Kota Belud is located at the northeast of Kota Kinabalu and we reached Kota Belud in just a little over 1 hour by using the Sepanggar-Sulaman-Kota Belud highway. We passed through paddy fields, villages and not forgetting lots of buffalo along the way.

Kota Belud itself is a rural town and the home of one of the local native tribes called "Bajau" who are popularly known as "The Cowboys of the East" or "Sabah's Cowboys" for their "expertise" in handling horses.

You'll see lots of local fruits, homemade food and delicacies, honey, handicrafts and some plants that i don't know the name of to which they claimed the plants are of traditional medicines or for protection purposes. 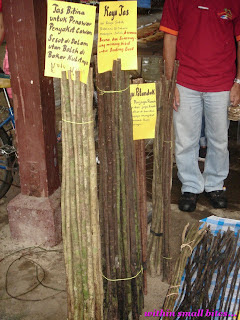 Pic : Some branch/wood that the natives use to cure sickness & protect themselves from fierce animal
There are also salted fishes and fresh fishes that are "displayed" in a very shocking way. 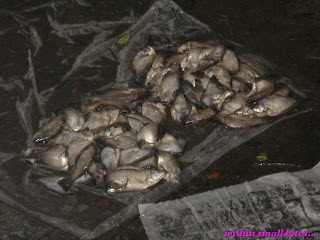 Pic : These were just put in the middle of the walkway, we need to watch out so we won't step on them

And not forgetting pots, pans and electrical goods, rattan baskets... they even sell handicrafts knifes. 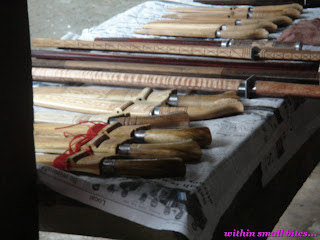 Pic : These are really nice

Pity that it was raining that morning, if not, we may be able to spend a longer time there browsing through the stalls and might be lucky to see those Bajau men in their traditional costume in parade or even witness how they auction buffalo to the highest bidder. 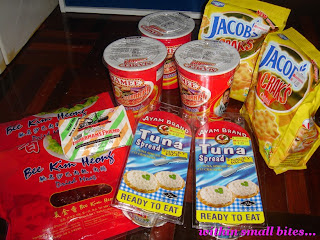 Pic : These are all the snacks i bring along with me for the trip!