Bites Tale : Had a quiet New Year eve... dinner and watching DVD at home... thanks to my flu and fever... But it does feel good to be able to "escape" from crowded restaurants and jams. Wishing everyone a happy new year 2009 and may this new year brings you abundant joy, love, health and prosperity!

We arrived Bilit Adventure Lodge and was welcomed by something we least expected at the jetty... a freaking leech... that was my 1st time seeing the little blood sucking creature... it looks so excited.. non-stop twisting and "extending" its body so it could somehow "stick" on us. I was too scared to take picture... and i can't even dare to move a step forward... me and my friends were being "blocked" by this creature while our 2 guides and driver just stepped passed it carrying our bags. One of the staff / boatman came and asked what's wrong... felt so ashamed when we told him we were afraid of the little leech... and his next reaction was laughing at us and then stepped on the leech.

Next, we were invited to go to the communal dining area overlooking the kinabatangan river while waiting for the boat to be ready for our river cruise. It felt as if i was in Klias, only this time the proboscis monkeys are more and bigger in size. Apart from searching for Proboscis Monkeys, our lead guide was very excited and was hoping that we could have the opportunity to see Pygmy Elephant. 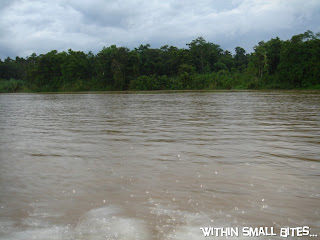 Pic : Off we go for our river cruise
We were in good luck but not great that day... we saw alot of birds and proboscis monkeys. However, most of the photos i snapped do no justice... most of them were blurred, if not, too tiny to see what i was trying to snap. We were all mumbling to ourselves that we can't zoom in too much with all our digital cameras. (Sigh... i missed my camera!!! Was lucky enough that the memory card can survived until we transferred all the photos on this road trip to our computers..) 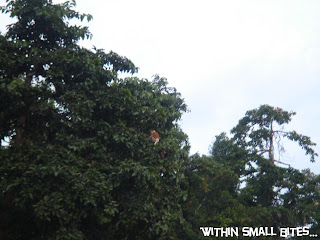 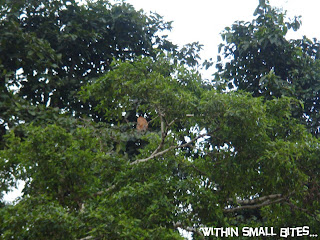 Pic : Proboscis monkey sighted
We return to the lodge at around 6pm for dinner. Dinner was good and we were told by the guests and staff there that there's so much to see and to do at the lodge itself. We could either join the night walk in search of wild animals or we could also join the tree planting for RM10. They kept telling us that we missed out on something great... turns out that they caught a big phyton crawling in search of food near the dining area 1 night before our arrival. Everyone keep snapping picture with it before it was released back to the wild. (I was actually thanking god while they were talking... luckily we arrived 1 day later... but i need to act cool in front of them.. the last thing i want is to meet with leech and don't talk to me about snakes ... muahahaha) 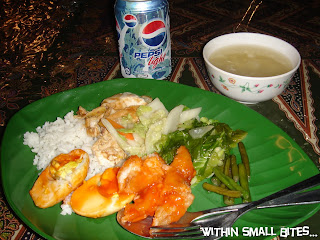 Pic : What i had for dinner

I refused to join the night walk as my guts automatically disappeared once darkness sets in. This happens even when i'm in KK... so i wouldn't put myself into any possibility that i might get a heart attack or even went crazy for not knowing what will i meet next in the jungle. So we went to bath early and enjoy chit chatting and supper (cup noodles, junk food and hot drinks).

We had to wake up at 5am and get ready by 5.30am to go for a morning river cruise experiencing how the wild wakes up... The sound of birds chirping, monkeys yawning, fishermen throwing his net and etc turns into music to our ears. 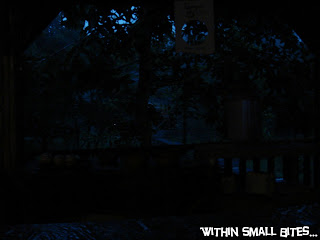 Pic : Everything looks so dark, we had to use the torchlights 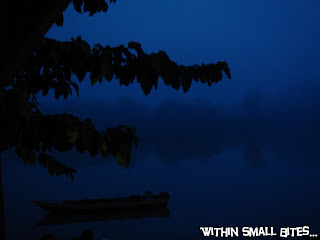 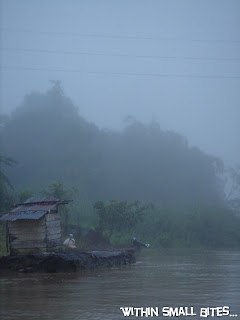 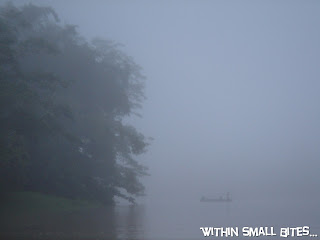 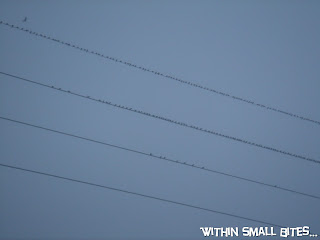 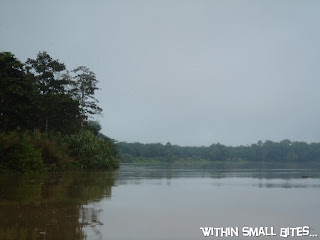 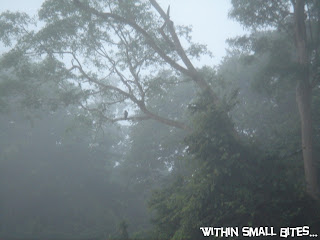 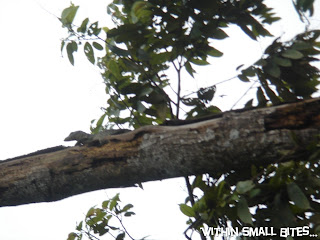 We were approached by a fisherman on our journey back to the lodge.... because of this... 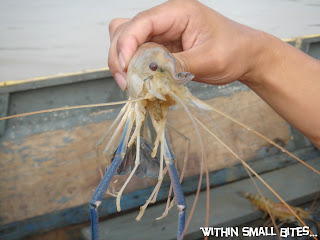 Pic : He wanted to sell this to us 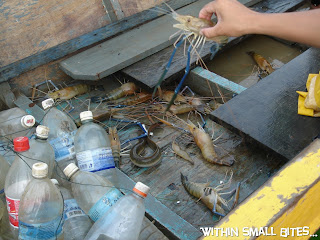 Pic : Look at what he caught that morning 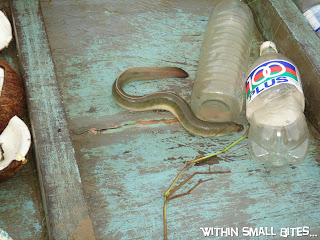 I've forgotten how much he charged... but anyway, i'm allergy to prawns... luckily... if not, i might be one of them who was forced to finish all the prawns that night.

Will tell you more ya! 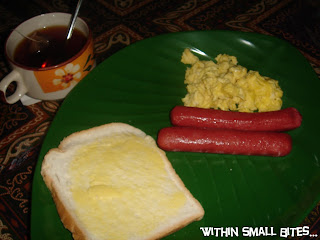 Pic : Breakfast is a must for everyone
Posted by MeatballOnline at Friday, January 02, 2009 2 comments: